Wrapping up our tour of the districts: Lospalos and Trilolo (Baucau)

As the rainy season started to establish itself at the beginning of November, we set out on our final trip to the districts: Lospalos, in the eastern extremity of the country, and a tiny village near Timor-Leste's second city, Baucau.
Lospalos is renowned for its especially fine sacred houses - "uma lulik" in Tetum - which are at the heart of Timor-Leste's traditional animist rites and which have become a cultural icon of the country itself. The imagery of the Timorese sacred house is so strong that echoes of this traditional symbol find their way into modern architecture - as well as being represented in designs for tourist souvenirs such as t-shirts and jewellery.
Over 2,000 people gathered at the local soccer field, to watch that Cinema Lorosa'e favourite, the Brazilian movie "Dois Filhos de Francisco", always a hit in the districts of Timor-Leste and an opportunity for a community sing-song, as the music in the film is so popular. And, as usual, the most frequently asked question after the show was "When are you coming back?".
Next stop: Baucau.  When we checked in with the local authorities in this charming coastal town, we were asked to take Cinema Lorosa'e to a remote village in the district called Trilolo, rather than screen in Baucau itself. The people of Trilolo had actually never seen a film on a big screen before, or even on television, as there is no power supply to the village. Spectators gathered even as we were setting up the equipment; when the giant screen was inflated to its full extent, the children squealed with delight and amazement: "It's touching the sky!" one said.
An excited crowd of 2500 adults and children improvised whatever seating they could, using floor mats, squatting on their heels, or just sitting cross-legged on the damp ground, shrugging off the heavy dew as they settled in to watch the Jackie Chan film“Karate Kid”, another winner in Timor-Leste with its blend of action and responsible martial arts philosophy. 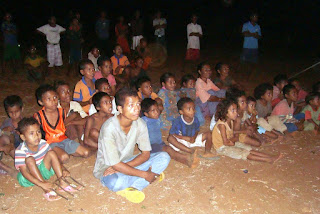 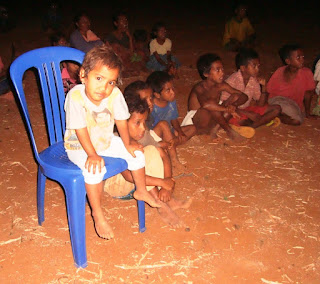 The audience cheered all the way through the film and begged for another movie, saying they would be happy to stay up all night. But we had to make an early start to our journey back to Dili  and it was with heavy hearts that we packed up the equipment and left our friends in Trilolo behind.
This year, we've travelled all over this spectacularly beautiful country, surprising communities in some of the  most remote corners of the land with a sudden chance to be entertained for the evening.  This is surely why movies were invented. We've been able to share the laughter and the thrills of films like "Karate Kid", and the collective feelings of sorrow aroused by the movie "Balibo", which deals with one of the darkest moments in the country's history.  Now, as the mountains of Timor-Leste are wreathed with cloud and the rains start to pound down in earnest, we can only hope that we'll have the opportunity next year to continue bringing movies to the masses with Cinema Lorosa'e. It is the best job in the world. 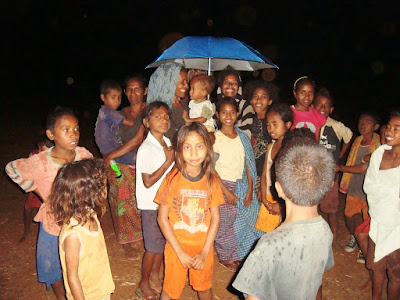 A special thank you to all of the Cinema Lorosa'e sponsors for their support:  Sun Theatre Yarraville, TOLL, The Magic Sound Company, UNMIT/"Ba Pas", Turismo Timor-Leste, The Office of the President of Timor-Leste, Timor Telecom, Rentlo Car Hire, the Embassy of Brazil in Dili.
Posted by Cinema Lorosa'e at 18:14