Cinema Lorosa'e takes it to the districts...

Cinema Lorosa'e started up in August with screenings in Dili - in front of Government House and at the weekly Sunset Fair and found itself an audience hungry for big-screen movies - especially in Tetum, one of the local languages of Timor-Leste.  In Portuguese times there had been a cinema in Dili, which was destroyed in the turmoil of Indonesia's withdrawal from the country in 1999 but most people living in the other 12 districts of Timor-Leste have only rarely had the opportunity to watch a movie - and many of them have never had that experience in their lives. So Cinema Lorosa'e has taken up the challenge of staging open-air film screenings for communities in each and every one of Timor-Leste's districts, to share with them the magic of watching a film on a big screen, under the stars, surrounded by an audience, enjoying a night at the movies together.  They came in their thousands.
Timor-Leste's famously tough international cycle race, the Tour de Timor was Cinema Lorosa'e's first chance to hit the road. The race is held under the auspices of the office of the President Jose Ramos-Horta and movie screenings along the race route - covering the eastern extremity of the country in 2011 - have previously been a part of the Tour de Timor programme. This year, using the President's giant, inflatable screen, setting up in community spaces like football fields, Cinema Lorosa'e was able to take over the movie nights, preceding the cylists in the villages of  Laclubar, Beacu, Iliomar, Com and Manatuto.  Opening with the famous movie "Balibo" (set in Timor-Leste, see below) in the local language Tetum, the programme also included "Avatar", "Unstoppable", "The Green Hornet" and "Narnia".  All went down very well. 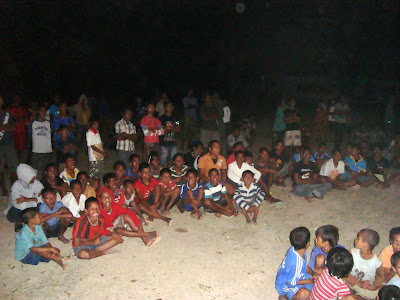 Then it was back to Dili for the weekend's screenings, a quick turnaround and back into the east of the country for Viqueque, Venilale and Baucau. This is where the "Balibo" effect really kicked in. The movie, starring Anthony La Paglia and Oscar Isaac, was set - and in part filmed - in Timor Leste. In 1975, as prepared to invade the country, five Australian-based journalists went missing. "Balibo" tells the story through the viewpoint of veteran foreign correspondent Roger East, who is lured to by the young and charismatic José Ramos-Horta to tell the story of his country and investigate the fate of the missing men. As East's determination to uncover the truth grows, the threat of invasion intensifies and an unlikely friendship develops between the last foreign correspondent in and the man who will become President.  "Balibo" was produced by Robert Connolly and is based on the book by Jill Jolliffe.
The area surrounding Viqueque was the heartland of the fierce Timorese resistance to the Indonesian occupation, so it was not surprising that the screening of "Balibo" should be a great success here. But it was amazing to see around 3,000 people crammed into the village's soccer field, young and old.
As word got out that "Balibo" was doing the rounds, the people of Venilale decided that they, too, wanted the opportunity to see the film. So the giant screen was put up in front of Venilale's beautiful Escola do Reino (People's School), and 1,700 people came to see it.  Some school children commented that events like Cinema Lorosa'e should happen more often as the East Timorese new generation in the remote areas need to know about the country's history.
“Os Dois Filhos de Francisco”, which drew an enthusiastic crowd of 1,000 people to the town's church. A power cut prevented the Cinema Lorosa'e team from inflating the giant screen but that did not stop them from going ahead with the show: they simply projected the movie on one of the church walls.
After Cinema Lorosa'e successes in of the eastern districts of Timor-Leste, it was time to move into the west, especially the areas bordering the Indonesian territory of West Timor - Maliana and the village of Balibo itself. Cinema Lorosa'e founder Michael Smith decided to experience this moment of movie history for himself, and came up from Melbourne for the trip.
The Maliana local Government representative made a special request for "Balibo" to be screened instead of the planned movie - "Bend It Like Beckham" - and it was a huge success, with 2,000 people turning up for the film at the soccer field next to the town gymnasium.
When the movie was over, many locals approached Cinema Lorosae's Maria Alves to thank her for providing the opportunity for them to see how things really happened in Balibo, which is just a short drive away from Maliana. Michael Smith of Cinema Lorosa'e said: "It was such a great feeling to hear the kids screaming with joy when the shorts started and to see the football pitch full with the people of Maliana". 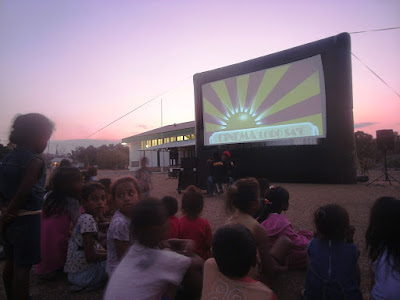 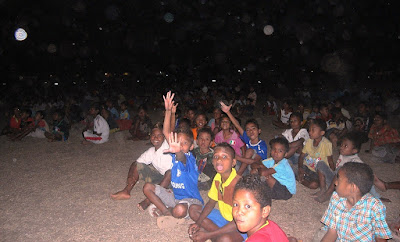 Leaving the happy movie-goers in Maliana, it was finally time to screen "Balibo" in Balibo. 600 people from this tiny village turned out to watch the film, filling the soccer field behind the "Balibo 5" House, beneath the infamous fort, which are both featured in the film.
Now steeped in the consciousness of all Australians, the Balibo House was the last refuge of the five Australian based journalists, Greg Shackleton, Gary Cunningham, Tony Stewart, Malcolm Rennie and Brian Peters who were murdered by invading Indonesian troops in 1975. The house is now a Community Learning Centre administered by the Balibo House Trust which was established by the Victorian Government in October 2002 to purchase and refurbish the Balibo House so it could be handed back to be used by the people of the district. 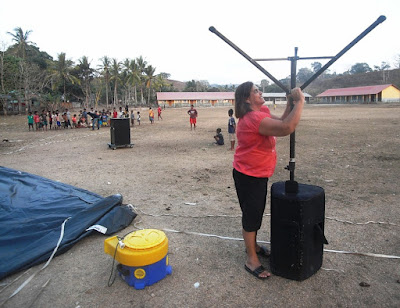 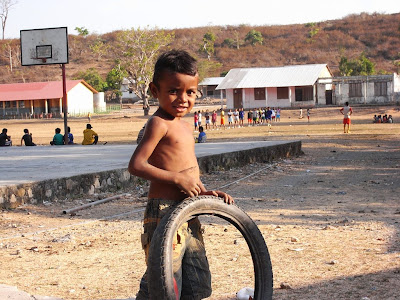 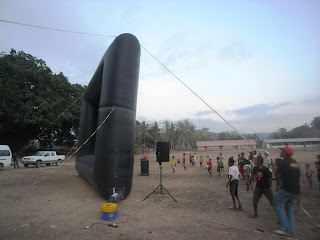 It was the first time that the people of Balibo had had the opportunity to see the movie. After the screening, Cinema Lorosae's Maria Alves spoke to local people, who said that they were very moved by the film and that they were sad about what had happened in Balibo, but had not seen how bad things were in Dili at the time.

For Michael Smith, screening "Balibo" in Balibo was the realisation of a dream inspired by the movie itself:  "My strong interest in Timor-Leste began when I first saw "Balibo", which we showed at the Sun (Theatre) in Melbourne. So, upon arriving in the village, I was eager to see the fort, walk the streets and visit the Balibo 5 House. It seemed fitting to be setting up the screen on the soccer field behind the House and at the foot of the fort. As the last of the day's sun lingered, sitting in the field, looking at the screen, with the Fort looming above, while a hundred or so young kids ran around squealing in excitement, many rolling their old motorbike tyres along, I must admit, after all of the work pulling this together, I finally thought 'Wow, we really did it!'"


After screenings of "Pirates of the Caribbean" and "Karate Kid" in Dili at Sunset Fair and Government House over the weekend (October 7th-9th) Cinema Lorosa'e will be taking movies to the masses in Ainaro, Same and Aileu on October 11th 12th and 13th. There will be a chance to see "Balibo" in Dili on October 14th at the Sunset Fair.
Posted by Cinema Lorosa'e at 20:09